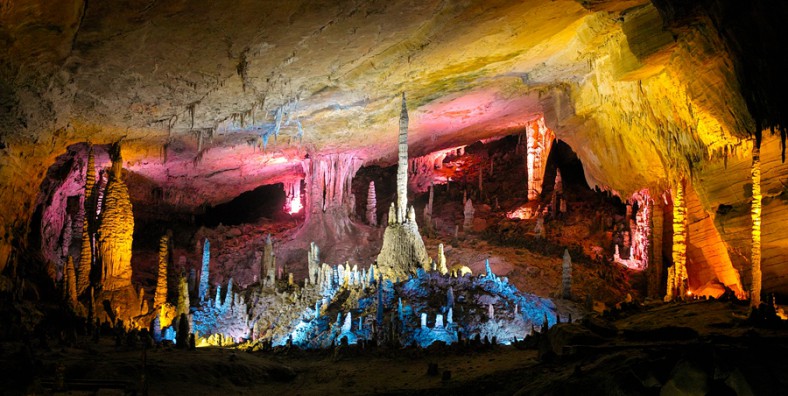 Yellow dragon cave is more beautiful than the outside which is a typical karst formation, different with sandstone platform. Yellow dragon cave is one of the important scenic spot in zhangjiajie,covering area of 48 hectares and it have 15 kilometre long and has a vertical rise of 140 meters. The inter recess is divided into four layers, two dry ones and two possessing waterways. The tally of natural wonders includes: one natural reservoir, 2 underground rivers, 3 pools, 4 waterfalls, 13 grand halls, 96 passageways and hundreds of thousands of thousands of stalagmites, and stalactites.

And you know that water plays an extremely important role in its development. Flowing into the fissures of the karst layer, water constanly dissolves the limestone rock,In the february of 1984, the local authotities started to develop the cave as tourist attraction, and set up the administrative department of the yellow dragon cave.There are two door,one is happiness,another is longevity. Both are open to the same way.anyway, What ever you want, all means is good luck or fortune,It is legend that yellow dragon lived in here for a long time,The smart boss of the company had done a great thing for cave, the stone inside the cave has been insurance by the boss,Sea suppressing neddle. What it does is to make the sea stray peaceful… it in fact is the highest stalagmite in this cave 19.2 meters 200 thousand years later, it will touch the top No.1 rocket of yellow dragon Just ahead of us, a huge, towering stalagmite stands looking like a rocket ready to blast off. It reminds us of china’s long march transport rocket.Hawk searching for food, conch hiding Many scenic spots in this fascinating world are permeated with the spirit of fairy tales.

Dragon palace: we have now come to the biggest, highest and most magnificent hall in the system. We can even say that it is the heart of yellow dragon cave. Counting the number of stalactites is a rather dull and dry undertaking, but it persuades is of the greatness of this hall. It covers an area of 14000 square meters and has an average vertical rise of 40meters; there are 1705 stalagmites and columns-516 of them over 1 meter high, 936 less than 0.5 meter high, and 253 between 0.5 meter and i meter high. Indeed, nearly every 10 square meters of the floor  posess its own stalactite.

Dragon king’s throne; this is the dragon king’s throne, the largest stalagmite in the dragon palace-10meters in diameter at the base and 7 meters in height. Round on the outside and hollow within, the formation affords us a cozy place to set up a table and play cards. And how did such a throne come into being? There is a long descent from the ceiling, and so most of the water flows along the stalagmite base and then runs down the slope. In this way, its base was enlarged and an immense flowsstone was formed.

Back palace ; the collapsed slope is 35 meters wide and 85 meters long. It is the largest and earliest avalanche in the cave, and it is calculated to have happened about 20000 years ago. This cavern has a vertical rise of 402 meters at its highest point, and the underground river’s exit is its lowest point. Between them is a span of 140 meters. Back palace is imagined as the location for the dragon king’s wives and concubines. In such a place you are likely to get into some trouble, so let’s not linger, let’s walk away right now. Maybe, you are reluctant to depart this beautiful place, but i am sorry, that you can’t take any rock specimens back with you and i sincerely wish beautiful yellow dragon cave could ever stay in your memory.